The meeting between Roble and Kenyatta solves some problems, others remain unsettled in Somalia

Somalia Prime Minister Roble met the Kenyan President in Nairobi (August, 10th). It is a step towards the much hoped-for rapprochement. The dispute over the communiqué issued by Nairobi after the visit reiterates the difficulties in this bilateral relationship. 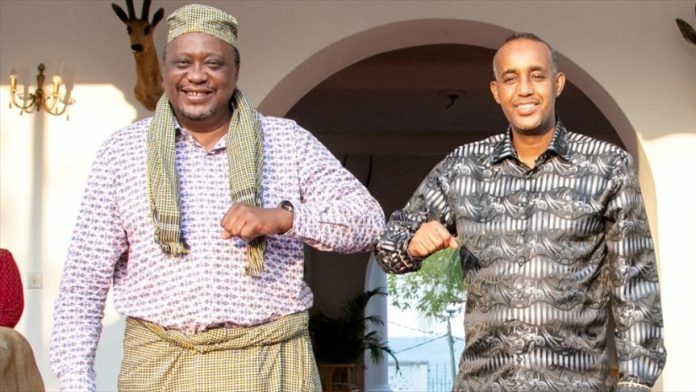 Taking a step forward only to have to take one backwards is it a good or a bad thing in politics? An example of this dilemma can be found in Somalia’s PM Roble’s official visit to Nairobi for meetings with President Kenyatta and the Somali community. The mission was the result of an official invitation received by PM Roble from Kenyan Foreign Minister Omamo to further discuss trade, security and bilateral relations – including more ordinary issues such as visas – which had already been discussed at Foreign Minister level in Mogadishu.

The visit was cordial, and the two political leaders agreed on the re-establishment of relations, recalling a common vision of development as key for stability. Later, during a meeting with the Somali community in Kenya, Roble himself said that trade and investment could resume ‘shortly’. This is important to entrepreneurs who rely on cross-border workers, or who are involved in the extensive bilateral trade of which the khat plant – internationally classified as a narcotic, and currently on hold – is merely an eponym.

In the aftermath of the meeting, the Kenyan presidency released a statement on social networks. It was, however, the cause of immediate new tensions before being hastily corrected. Kenyatta had wanted to include a reference to the maritime dispute now before the International Court of Justice in The Hague. The note reported that Kenya’s request for an ‘amicable’ solution had been discussed.

Roble had to intervene to ensure that the ‘real’ content of the meeting was reported and therefore references to an out-of-court settlement cherished by Nairobi be removed. The Somali Prime Minister firmly denied having discussed the issue and closed the door once again to a bilateral agreement on this matter.

The affair exemplifies the real point of relations between Nairobi and Mogadishu today: after the recent high-pitched rivalry and the invitation to Nairobi of regional Somali leaders instead of national ones, it is useful for both leaders to restore a minimum level of coexistence. This also requires Mogadishu to give up reaching for easy consensus through the sterile denunciation of Nairobi’s interference, trying instead to safeguard as much as possible of a bilateral relationship which cannot be disregarded, even if it is unbalanced.

The arrest in Nairobi of three terrorist suspects wanted in Egypt and Somalia indicates that cooperation can proceed on other fronts. After Nairobi, Roble could in fact visit Egypt, for a new mission that opens or will try to open other channels of international cooperation, even if in possible competition with other heavyweights in Somali foreign relations such as Ethiopia and Turkey. In the week under consideration, Turkey donated additional military equipment to its Somali counterparts.

Meanwhile, the appointment of senators is proceeding – from the SouthWest and Puntland. Both states have completed the announcement of contenders for a seat in the Upper House. There are notable absentees, such as former Prime Minister Sharmarke and former Minister for Planning and Communications Jurile. On the other hand, former Puntland President Farole and members of regional President Deni’s inner cabinet are included. He is after all entitled to use his appointment powers to influence the composition of seats and thus future parliamentary activity.

In this context, threats of terrorism continue, and violent activities have been concentrated in the centre-south of the country. Piracy is also resurfacing, with reports of a suspicious approach about 100 nm off the coast of Mogadishu. These threats remain a function of more complex internal and regional balances.