TPLF forces threatening the city of Gondar, a vital center towards Sudan and western Tigray

In Ethiopia, TDF forces continue to advance in the Afar and Amhara regions, where they have come close to the important center of Gondar. If this were to fall, the Amhara forces still present in western Tigray would find themselves isolated and without any hope of being able to resist the TPLF. 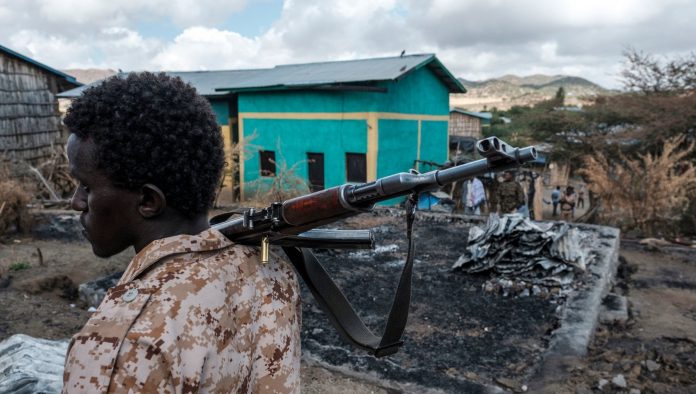 On August 20, Tigrinya TDF forces entered Berahle district in the Afar region, shortly thereafter clashing with local regional security forces. According to local sources, there are no federal army units on the ground.

On August 14, however, the head of the Eastern Command of the federal forces, Gen. Belay Seyoum, had reported intense fighting in the Afar state between the federal forces (ENDF) and those of the TDF, resulting in a Tigrinya defeat costing over 300 deaths. Several doubts, however, have been expressed by the media on Gen. Seyum’s claims.

The Afar region, apart from the news about the fighting, confirms its growing centrality in the evolution of the Ethiopian crisis, not only limited to the effects of the conflict in Tigray but also expanding south to the border with the Somali region. More than 300 Ethiopians of Somali ethnicity were allegedly killed by Afar militias at the end of July, at the height of a crisis that, according to the TPLF leadership, is artificially fueled by the federal government to block – without taking responsibility – the railway line connecting Djibouti, through which most of the humanitarian aid going to Tigray passes.

On the front of the conflict in the Amhara region, on August 19, the TDF forces reached the town of Debre Tabor, thus pushing deeper south than the positions reached last week, near Woldiya.

The town of Debre Tabor is located along the road axis of the B22 highway, which enters the A3 artery halfway between Bahar Dar and Gondar, only 100 km south of the latter. This could allow the TDF forces to encircle the city of Gondar from several directions (south, east and north), and the eventual conquest would cut off any possibility of connection with the north-west of the Amhara region and with the western regions of Tigrai, completely isolating the Amhara and Somali militias deployed in that position.

On August 16, the head of the Amhara region government’s communication office, Gizachew Muluneh, held a press conference to explain the developments of the crisis in the region, claiming that the Amhara forces are fighting against the Tigrayan forces of the TDF, which in turn are allied with the Oromo Liberation Front (OLF) and the Benishangul Liberation Front.

Gizachew defined the TPLF as an aggressor, accusing its military forces (the TDF) of planning an invasion of both the Amhara and Afar regions. In particular, the target of the TDF would have been the Benishangul area, where it would have fomented unrest and violence together with local rebel forces.

The conflict bulletin provided by Gizachew is dramatic. Amhara forces are engaged in combat in three distinct areas. The first is the area that includes the road section of the B22 between Gayint, Farta, Guna, south of Gondar, in fact surrounding the town of Debre Tabor; the second is the area of northern Wollo, also in this case in the eastern section of the B22, between the towns of Koreman Alamata Kobo and Mekit Gashena; finally, the third is in Benishangul Gumuz, near Guba Lafto, a few kilometers from the GERD dam and the border with Sudan.

Even the area north of Gondar would be affected by an increasing number of clashes, confirming that the communiqués issued by the TPLF are not very different from the truth in the terms in which they describe the course of the conflict, making the conquest of an important center like Gondar now within the reach of Tigrayan forces. If this were to happen, the TDF would be able to completely isolate the Amhara and Somali forces in western Tigray, preventing their supply and making them extremely vulnerable.

The Amhara spokesman’s tones emphasized the resilience of the local forces, the achievement of important successes and the determination not to give in to the Tigrayan invasion attempt, but failed to appear convincing in any way and did not provide any evidence of the announced – but unconfirmed – military successes on the ground in several locations. The trend of the front, by virtue of the very description provided by Gizachew, indicates on the contrary a real rout along a wide line of fire between the TPLF forces and the Amhara ones, supported by some Somali militia units and, it would seem, a sparse ENDF presence.

No reference was made by Gizachew Muluneh about the presence of Amhara forces in western Tigrai, as well as the possibility of an encirclement of the same if the city of Gondar or the road axes that wind northward from the ancient capital, representing the only road access to western Tigray, were to fall.

On August 21, eventually, a counter-offensive supported by the federal army and Amhara forces, would have stopped the Tigrayan advance in the area of Gayint, with the reconquest of some outposts, determining a stalemate in the fighting.